I visited the von Winning estate in Deidesheim late last year for a pre-Christmas event and was largely impressed was what I tasted. The 2014 Rieslings – from their inox-fermented ‘Dr. Deinhard’ collection, to the full range of barrel and cask-aged wines under the von Winning moniker – were excellent. I also enjoyed trying the much-acclaimed ‘Sauvignon Blanc I trocken’ – a very ‘deep’, accomplished wine without doubt. It was pleasing to note that oakiness wasn’t issue at all with the Rieslings. I knew from past reports that the first couple of vintages under Stephan Attmann’s stewardship – starting in the late 2000s – divided opinion, but the barrels and casks have evidently bedded down and shed their overt woodiness in the meantime. 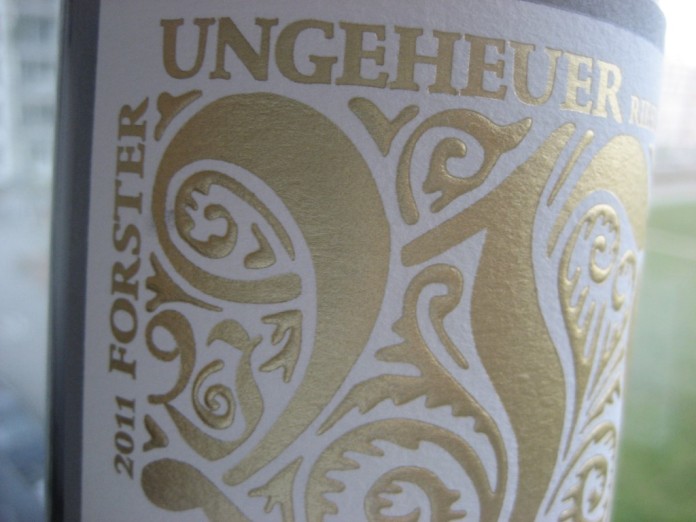 von Winning, Riesling Ungeheuer GG trocken 2011, Pfalz
Bright, shimmering yellow. Lemon on the nose, with oak hints albeit only to the extent that they accentuate the citrus and lift it to an even higher plane. Many of the Ungeheuer Rieslings I have tasted over the years have shared these same distinct lemony aromas. A terroir note? I can also smell earthy, spicy notes – very Pfalz-like, you could say.

The oak influence on the palate is so discreet as to render it negligible from a sensory point of view. However, the structure that the oak lends is so impressive, expressing itself in a silky mouthfeel with a noticeable film that coats my tongue. Medium-bodied with lemon again, yet the acidity is so ripe and mature. A bready note also emerges, providing an extra layer of complexity. The finish is long. A superb wine by anyone’s standards.