So far, this is one of the best wines I’ve had this year.

Trimbach, Pinot Noir Réserve 2015, Alsace
As with Bürklin-Wolf in the previous blog post, we’re talking here about an icon of dry Riesling. However, this Pinot Noir is an education in itself.

Vivid ruby/garnet with pinkish edges. Very pure and linear impression on the nose. Less the charmer and more a masculine, minerally character with not an ounce of fat. Maybe a whiff of red or black forest fruit, but nothing too overt. Was this aged solely in inox or in wood? I can’t detect anything pointing to wood.

Unfettered, sinewy and precise on the palate. Medium-bodied and bone dry. The tannins feel slightly crunchy in this mere baby of a wine, but they are well-integrated. Some red fruit emerges, but in a firm, no-nonsense, athletic style. Refreshing acidity washes over the back palate and into a long finish. This is a 180-degree departure from the mushroomy, sous bois smell of the undergrowth or the comforting savouriness of many other Pinots. What we have instead is the intense purity and linearity of a wine that puts its proverbial front foot forward.

I currently have a backlog of notes to write up. Here is a short adaptation of some scribbled notes I made back in January.

Dr. Bürklin-Wolf, Pinot Noir 2012, Pfalz
Dark ruby with hint of brown on the edges already. Fresh in the nose, however, with the initial whiff of warm squash balls as well as minty notes. Then raspberry and hints of blackcurrant.. Great structure on the palate. Stemmy, minerally (yes, I know …), raspberry, elegant, good finish.

Surprisingly excellent from a winery known more for its world-class dry Rieslings.

They say distance makes the heart grow fonder. In my case, it’s our current distance from Markgräflerland – the source of so many underestimated wines. Thankfully, I can still order wines straight from source. Orginally, I ordered three bottles of Dirk Brenneisen’s ‘Himmelreich’. The merchant (Markgräfler Weintheke) were down to their last two bottles, so I received a bottle of their ‘lesser’ Pinot Noir instead, including the resultant price difference. This was no disappointment at all, because – in the interests of full disclosure – I’ve blogged about the wine before. 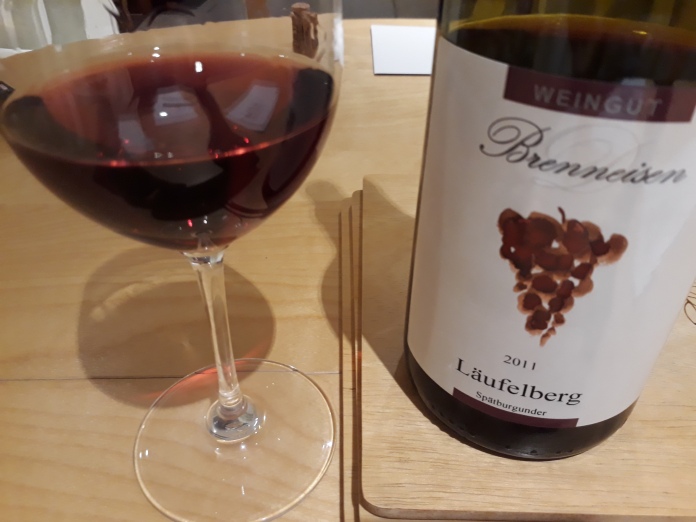 isen, ‘Läufelberg’, Spätburgunder 2011, Baden
Aged for 20 months in used oak barrels, and unfiltered. Ruby in appearance, with a lovely immediate stemminess on a fragrant nose. Almost (rose-)watery, along with hints of strawberries. If you ‘heard’ the aromas as musical notes, they would be the top notes, so to speak: brilliant red light in a glass.

Note that none of my scribbled notes on this wine mentioned the words ‘oak’ or ‘wood’.

Unashamedly sexy and voluptuous on the palate. Medium-bodied at the very most, with oh so rounded tannins. It sounds like a cliché … but it was velvety. A wave of refreshing acidity then takes over, whipping the momentary decadence into shape. Beautiful balance. There is a meagre 0.6 g/l of residual sweetness, but this wine is still so generous. Es ist eine Wonne – a sheer delight. This is a wine that keeps on giving.

I drank the whole bottle over an evening while taking down these scant notes.

Urs and Regula Jauslin are local growers from Muttenz whom I’ve heard about in recent years on account of their wines garnering awards in Swiss-organised competitions such as the Grand Prix de Vin Suisse and the Mondial du Pinot. I take accolades such as these with a pinch of salt because, basically, they are only as good as the line-up of competing wines – which usually looks a bit lopsided depending on which country, which publishing house or whoever is holding the tastings. Nevertheless, both of the above competitions are fairly prestigious in their respective context. This, the Jauslins’ latest Pinot Noir Hohle Gasse, picked up a gold award at last year’s Mondial du Pinot. Was it any good?

Jauslin, Pinot Noir, Hohle Gasse 2013, Muttenz, AOC Basel-Landschaft
Very dense ruby with a violety rim belying the wine’s youth. Stemmy and herbal with a slightly alcoholic whiff to begin – which, however, gradually beds down with air. Then going in the direction of forest fruit hints. Almost brambly. Some 72 hours later, some floral (violet) hints are emerging, along with a suggestion of raspberry. There are mineral notes too. And mushroom. Ultimately, what we have here on the nose is a balancing act between overriding dark (brambly) elements on the one hand and berry fruit on the other.

Quite chalky on the palate,  packing quite a punch with the same predominantly brambly characteristic (dark berries and black cherries) plus raspberry serving as a counterpoint. Beautifully integrated barrel notes. This of course is a youthful wine that still needs to find its feet – still very firm and obvious in its fruitiness, but with more than a soupçon of the complexity that lies underneath. On the third day, the main impression I have is that of a wine that is firm and masculine in nature, built for the long run (as so it should). The acidity is still a touch on the ungainly side, but this merely backs up my hypothesis.

So yes, in short, I can see why this did so well at the Mondial du Pinot. And as for its potential, well …

This was a present from my wife to mark a significant birthday late last year, although I was allowed to buy the actual bottle myself at a wine shop in Freiburg, Germany. Whenever I enter the store, situated on the edge of the old town, I’m like a child in a sweet shop. So many lovely bottles to look at. But this time my mind was already made up.

Rings, Spätburgunder trocken, Saumagen, 2011, Pfalz
I’d been wanting to sample this wine for ages. The Rings brothers were responsible for one of our wedding wines, so this is a property we’re particularly fond of. We also stayed a couple of nights at the wine estate itself back in 2009. As far as I know, there is no B&B anymore, just a modern winery – Andreas and Steffen Rings have gone on to bigger and better things in the meantime, although they were already on a lot of people’s radars back then.

Typical Pinot ruby in appearance. This is expressive as soon as I open the bottle. Raspberry, chalk, mint leaves and a suggestion of cherry pralines on the nose. Sounds fairly banal, I know, but the aroma is extremely imposing and detailed. Some 24 hours later, the impression is more restrained – even reticent – and veers more in a lactic, or chocolatey, direction.

An initial surge of refreshing, almost sour acidity on the palate lends grip and urgency. Utterly crystalline in the mouth, with beautiful structure – quite ethereal. Or, as my wife succinctly remarks, “Heavy but light.” Mints notes emerge, becoming increasingly distinct. This is very complex. Only medium-bodied, satisfyingly dry, but dense and succulent. It goes without saying that the finish is long. A day later, the above impressions strangely feel a little more diffuse with less overall expression, but this isn’t really a quibble as such.

Exceedingly fine and up there with my most memorable Pinot Noir experiences.

Since first arriving in the Basel area area back in 2000, I have lost count of the number of times I have gone on walks in and around the vineyards of Tüllinger Hügel – the hill that separates Weil am Rhein to the west from Lörrach to the east, and, at its spur, overlooks the picturesque open-air baths (recently redesigned by Basel architectual duo Herzog and de Meuron) in the Swiss canton of Basel-Stadt. Here, the border between Germany and Switzerland straddles the slope in a somewhat haphazard fashion, although in general the vineyard plots at the bottom of the incline belong to Switzerland. Unlike the south-westerly Weiler Schlipf, the land on the German side, Riehener Schlipf, named after the Swiss municipality of Riehen to which it belongs, has more of south-easterly exposu

re. Like its German counterpart, this is limestone territory. In theory, the potential of the Swiss plots is just as great.

This is where German grower Hanspeter Ziereisen and young Swiss winemaker Thomas Jost enter the equation. Jost worked for some time at Ziereisen’s winery in Efringen-Kirchen. The two recently acquired the lease on the vineyards – which are in fact owned by the village of Riehen. If you want a more in-depth background report, “Bonvinvant” does a sterling job in his blog post “Spitzenwein vom Riehener Schlipf“. The article is in German, and I think it would be a tad unfair for me to paraphrase it all in English, given that he originally put in all the research for it to be published in the local paper, Basler Zeitung. Nevertheless, the basics are as follows.

Jost & Ziereisen currently produce two white wines: one a Sauvignon Blanc, the other a Pinot Blanc – both named “Le Petit (Blanc)”. A third white, a Chardonnay, is due to be released in 2017 and will be called “Le Grand (Blanc)”. As you can gather from its title, this latter wine will be a cut above the other two. The reds – both Pinot Noir – are structured along the same lines, i.e. “Le Petit (Rouge)” and “Le Grand (Rouge)”. This keeps things nice and simple. It is also very much a nod to the pair’s mutual love of all things Burgundy. In fact, I daresay both would argue that this locality – with its limestone soils both on the Tüllinger hill and in Ziereisen’s vineyards a few miles further north, and with the warm air that tends to funnel up here from France – is just as suited to growing Pinot Noir as, say, the Côte de Nuits.

I tried their “lesser” Pinot Noir over the weekend.

Jost & Ziereisen, Le Petit Rouge 2013, Pinot Noir, AOC Basel-Stadt, Riehen Schlipf
I’m rather tickled that Basel-Stadt has its own AOC (appellation d’origine contrôlée), given that the vines in Riehen are, as far as I know, the only vines grown commercially in the whole of this city canton*.

Invitingly ruby in appearance. There is a certain translucence, but, on closer inspection, the density of colour is fairly middling for a Pinot. Lovely ethereal stemmy notes greet me on the nose, along with hints of cherry. Purity and finesse are the by-words here. The aromas are elegant. Nothing is loud. Stemmy again on the palate – this is a good characteristic, lending the wine an extra dimension. The tannins bite ever so slightly, but this is also good as it provides a counterpoint to the elegance and purity of the fruit (red and dark cherry). Supple but no more than medium in body. The finish is refreshing, savoury and satisfying. Maybe this is autosuggestion, but I can detect a certain similarity to the Pinots that the Schneiders produce just a few stone throws away in Weil. Both share the same understated finesse.

* Having said this, there is also a small patch of vineyard situated to the left of the Flughafenstrasse (the customs-free transit road leading to Basel Airport) just before you reach the “Friedrich-Miescher-Strasse” bus stop in the direction of the airport. To anyone living in Basel – keep your eyes peeled next time you take the bus past there. I have no idea who picks the grapes. Maybe someone reading could shed light on this.